Here is a method of deriving some tetrachordal like shapes starting with the sub 7-14 series borrowing Schlesinger designation for Mixolydian. It is interesting to note that to derive each form, there is a shift up the subhamonic series by multipling by 2, 3, or 4 times shifting the series to 14-28, 21-42 and 28-56 respectfully to derive a class of scale. The term Tri-Chromatic (formed by multiplying by 3 the 7-14 series) is invented here to designate a new scale type in between the chromatic and enharmonic. In each set of four a different interval acts as a disjunction like interval and greatly expands the range of what a disjunction might be. These being in order 8/7, 11/10, 14/13 then these are repeated in the next three to construct tetrachordal shapes where the large interval is at the bottom as opposed to the top. It was an idea Wilson left unexplored past this page it appears. The other tetrachordal permutations are left unexplored. 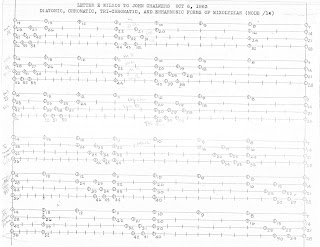 Posted by Kraig Grady at 3:29 PM No comments:

Orson Tuning found by Wilson as early as 1997

This tuning was later called Orson. This page is excepted from of EXTENDED DIAGONALS AND VARIOUS PRIMARY AND SECONDARY RECURRENT SERIES.  Wilson would often mark those places where a recurrent sequence would be close to an Equal temperament scale with an arrow or an exclamation point if it was negligible as can be seen in the zig zag pattern. for more information on these body of scales, please look at http://anaphoria.com/wilsonmeru.html 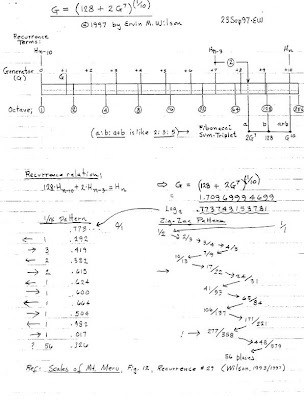 Posted by Kraig Grady at 8:22 PM No comments: 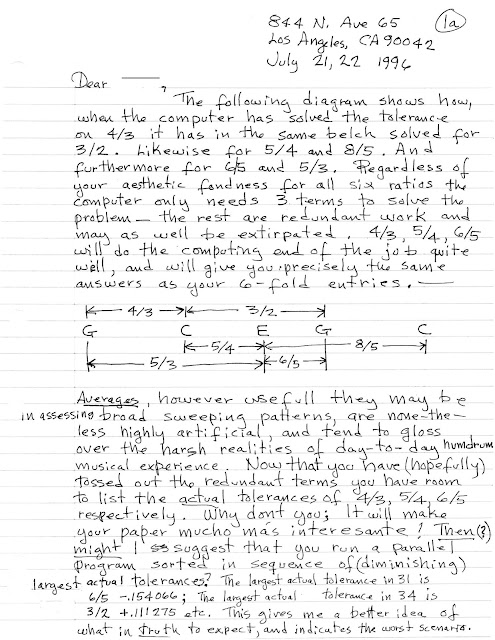 In this sketch of a letter to a peer, Wilson points out his preference for evaluating temperaments by finding largest tolerance in the scale as opposed to averaging out. This focus on he worse case scenario of tuning makes sense in that the averaging of the others will not diminsh what stands outs.
Posted by Kraig Grady at 2:56 PM No comments:


This top diagram has been a part of the 'tres.pdf' document for years but it was only after finding the second in his notes do certain aspects become clear. Wilson has taken a trio of terms found in the scale tree and proceeds to multiply them to where they can be easily used to generate a scale tree contained within a 4/3. The beginning set is formed by an outer pair of fractions with the medient being the third term. The top diagram is an example of the first formula realized. In the bottom half we see he also adds up the diagonals which give us different terms to the classic fibonacci series generated by the classic tree. The method in which he determines what ratio each side converges on is unknown. It is possible he might have figured it out just by hand.
Posted by Kraig Grady at 5:50 AM No comments:

Here is a Stretched Pelog Tuning found in one of Wilson's notebooks. While not dated, it occurs between pages dated from late 1993. It seems to go through areas that others later have explored.

Posted by Kraig Grady at 6:23 PM No comments: