The Harmonic and Subharmonic Ogdoads with 12 Tones 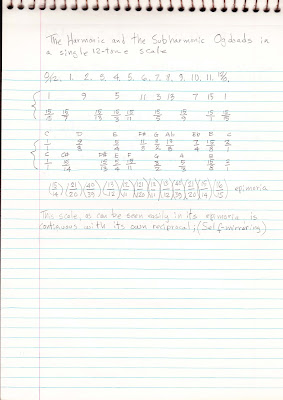 This quick note written between other papers dated from 1996 shows the possibility of placing a the 13 limit with the harmonic and subharmonic series within a single 12 tone series. Placed at the distance of the 15 means that both series also have the 15th  of their series. The idea of placing these two series apart like this can be seen on page 15 of  http://anaphoria.com/earlylattices12-.pdf
That scale of Gary David illustrates 2 harmonic and 2 subharmonic 9 limit pentads with 12 tones.  He was the first to point out the use of the 15 as a mirror point with 12 tone scales which here we can see is applied in a slightly different way.
Posted by Kraig Grady at 2:53 AM No comments: